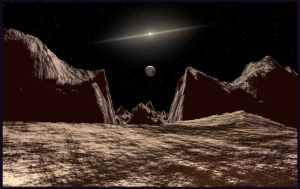 Thanks NASA for constantly doing research for me. With a steady flow of inspiration coming from the scientists of the world, all I have to do is do a quick google search and BOOM…super exciting news about the cosmos unfolds before me. Of course the scientists also employ artists to come up with lovely pictures that I can sit and stare at, waiting for my brain to sprout some exciting idea. This image was created by an artist called Karl Kofoed, famous for his sci-fi illustrations. He created this image of the snow fields of Pluto by using data collected by the New Horizons mission. This image struck me instantly since one of the alien worlds in my book was based on Pluto. It’s fantastic to have a visual reference to connect to the imaginary world that I created.

Where would I be with out you science?

This brings me to an issue that I ponder quite regularly. Science and art are closer related than many people think. Back in the early days of modern sceince, before photography, scientists relied on artists to draw anatomical and biological figures in order to document and learn. More often than not, the scientist was the artist. Remember the guy who did this? Da Vinci? Scientist or artist? Is there a difference? 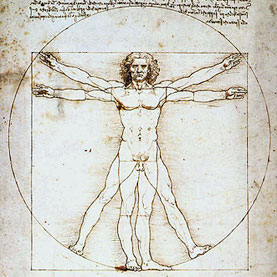 Well, sure I guess there are huge differences, but I think that it’s important to regularly reflect on the interconnected nature of our lives. No aspect of human culture can truly be separated from the rest. Politics, history, human relationships, religion, sport, everything is intertwined.

“All religions, arts and sciences are branches of the same tree. All these aspirations are directed toward ennobling man’s life, lifting it from the sphere of mere physical existence and leading the individual towards freedom.”

I couldn’t have said it better.

My brother is a research scientist, and while he loves art, he often says that he wishes that scientists got as much credit and notoriety for their work as artists do. I agree with this wholeheartedly, the sciences deserve much more support and praise than they often receive. However, so do the arts. And I’m being broad here, including anything from visual arts, films, and sculpture, through to books, music, dance, etc. I think that without art, the human race could not be what it is today. While I’m an artist, I know that nothing I create could be possible without the gifts of science. My computer agrees with me. What do you think? Are you a scientist or an artist? 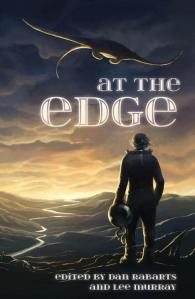 I’m very excited to announce that I have another short story accepted for publication in an upcoming anthology, At the Edge. The collection is being edited by the award-winning pair – Dan Rabarts and Lee Murray.

At the Edge: TOC and Cover Reveal

My story, Narco, features alongside stories by some amazing authors from New Zealand and Australia. I feel very honoured to be included in this collection of works.

The anthology is set for release mid 2016, so I have some time before I really start plugging the sale 🙂 The cover and TOC was released on Monday, so it’s official. Yet another publishing credit on my list. I am very chuffed and super proud of the work being produced by artists from our little corner of the globe.

I’ve been too busy with work all week to post this sooner, but it’s been worth the wait.

How about you? Do you have great exciting news to share this week?

It seems I can’t look at the internet at the moment without coming across some news about the global refugee crisis. It is a human exodus unlike anything we’ve seen since World War II. With social media as prevalent and powerful as it is these days, there is no shortage of horrors to be seen, from photos of suffering children, to YouTube videos of people desperate to find refuge. But there are moments of hope and kindness too, such as the welcome that Germany offered to many of these displaced people.

It is such a complex and harrowing situation, one that I am not going to get involved in discussing on this blog other than to say there is no shortage of inspiration for artists these days. Social media has brought the world in closer. We can see, hear and share our stories with just a few keystrokes. But it’s a system that encourages a short attention span too. It’s easy to become disassociated from the things we see on the internet. Over-saturated, inundated and bombarded. Sometimes I just want to unhook from this network. I want to unplug from all the updating, advertising and media mayhem and just switch off. But it is important not to give up on humanity. We all do what we can to help those in need. Whether it is through offering donations or simply sharing their stories.

We are all in this together. Each person on the planet who lives at this very moment has one thing in common — we are here. We have no where else to call home. In the face of every fellow human, I see my own face reflected. If one person suffers, we all suffer. It is easy to feel helpless, simply because the problem is so far away from where we might live. But we’re closer than we think.

Every person out there doing some good and lending a hand is depending on us to make sure their efforts are appreciated. So, if all you can do is read an article or share a post, you are still making a difference. Find a person who is making a positive change and share their story.